The site uses cookies and other technologies to help you navigate, as well as provide the best user experience, analyze the use of our products and services, and improve the quality of advertising and marketing activities.
Accept
RTVI
Interviews
17:09
Former Putin aide: Stalin Constitution more progressive than Putin's amendments
Share: 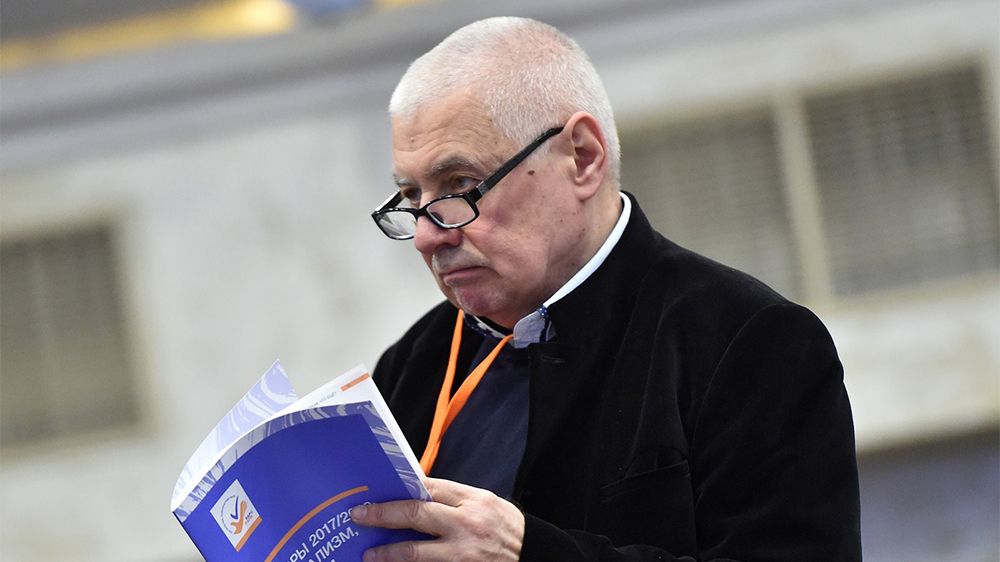 Russian President Vladimir Putin introduced a new package of amendments to the State Duma that include a mention of God and the Russian people as a “state-forming” ethnic group. Another proposed change is the description of marriage as an explicitly heterosexual union. Stanislav Kucher discussed Russia’s new Constitution with political analyst Gleb Pavlovsky, a former Kremlin aide.

The new amendments to the Russian Constitution mention God, our ancestors, the hereditary nature of Russian power, and have quickly become the subject of jokes and ridicule. What's so unusual about the new preamble to the Constitution? Why has it provoked such strange and diverse reactions?

The procedure itself is outrageous. The Constitution’s being recklessly rewritten by God knows whom. Every next sum of amendments proves to be more sloppy than its predecessor. Against such a background, the amendments that Putin originally proposed in January look liberal.

Liberal compared to what?

Compared to the distortion of all constitutional proportions. Mentioning God isn’t in itself scandalous, but why did we have to insert the idea of God into a secular state while leaving it secular?

All Constitutions that mention God – not only the American Constitution – use that concept as a focal point for national values. You may accept those values as your own or rescind them, but they are described nonetheless. God in this version of the Russian Consitution is a strange addition: he's bequeathed to us by our ancestors, but it is not clear how and what denomination he belongs to. That's why we’re starting to hear grumbling from both Christians and Muslims, as this is a deist God, the god of Voltaire and the like.

The concept of a Russian-speaking nation is also being introduced, which is even more dangerous. Multinationality and multi-ethnicity have been part of every version the Russian state up until now – the Russian Empire, the Kingdom of Moscow, the Soviet Union, and the Russian Federation. Power structures have never been formally based on the Russian people.

There was a debate about this at the very end of the Russian Empire – Stolypin, who did a lot of useful things, screwed up a little when itcame to this. He tried to impose a “Russianness” on the state that was never Russian in the exact sense of the word.

This tension was also present in the Soviet Union – “Unbreakable Union of freeborn Republics, Great Russia has welded forever to stand”. There are a lot of contradictions here – how can you weld together freeborn republics?

That isn’t the Constitution, though – the Stalinist Constitution, unlike the Stalinist anthem, was quite consistent. It was strictly kept in the spirit of internationalism, and, frankly speaking, had as many democratic freedoms as its European counterparts. They weren’t upheld, but they were there in writing.

Of course! Why is this being done? These amendments will slowly split society apart – this is nothing other than denationalization, creating a nation based on submission. You’ll have to speak Russian or at least pretend to recognize the state language.

I have to add that the notion of religion as something inherited from one’s ancestors is rather pagan and unorthodox – absolute nonsense, if you ask me.

As the saying goes, “the strictness of Russian law is compensated by the lack of necessity to observe it”. In your opinion, the danger of the new Constitution lies in its capacity to influence the state’s behaviour?

I must say that the Consitution’s always been slightly better than the laws ever since 1936. The laws were terrible, and one could argue against them by quoting the Constitution. The dissident movement of the 1960s and 70s heavily relied on the Stalinist Constitution in their battles with the government.

There is also the international notion of constitutional identity – a nation in the modern sense is based on a constitution rather than on an ethnic group.

I recently tweeted out my reaction to Dmitry Peskov’s Kommersant-FM interview, and that unleashed a flurry of comments – people kept saying that these amendments were rushed, that Putin delegated them to someone, and that got handed down to someone else, resulting in what Putin himself would call a “blizzard”. As someone who’s worked with Putin, how would you explain these rather questionable results?

He was more careful when he started, otherwise we wouldn’t have had him for these past 20 years. I don’t think he wanted to explain his desires to his aides, and even if he did, he couldn't have explained it clearly – people around him aren't ready to think for him. Then he decided to hide away, and wrote a first draft. He didn't want to argue with anyone – he's psychologically unwilling to argue about this. Was it possible to go the authoritarian way and hold a referendum? Authoritarian regimes love referendums, which they usually win. The Pinochet case was exceptional because Washington got involved.

He came up with some kind of popular vote – we’ve been seeing ghosts of popular votes since 2014, when the government tried to swallow Crimea in a “legally decent” way. He chose not to follow the legal route, confused everyone by doing so, and everything began to roll in different directions. We now have a commission of blockheads offering up their wet dreams about what they’d like to see in the Consitution.

You see, this is a perestroika, but nothing like Gorbachev’s – it’s a truly uncontrollable process. Putin came up with this new model of popular support – absolutely illegal, by the way – and now he has to work with it. In January you could clearly see that the amendments were split into two groups: social and institutional.

Everyone understood that the social changes were bait, nothing more than a PR stunt. Then it turned out that the social aspect wasn't enough to attract people to vote. That’s when they started heaping everyone’s wants into one pile – the nationalists' desire for a “state-forming” people, for example. That’s practically a time bomb under a multi-ethnic state – one more dangerous than proletarian internationalism. What kind of state-forming nation is this? It doesn’t establish anything, it’s just there to maintain unity. Children are now also the domain of the state, which is complete nonsense – that even outraged Patriarch Kirill, although cautiously. This will all end badly, we all understand that.

So the Putin Constitution, which is more rigid and orthodox than its Stalinist counterpart, is part of Putin’s perestroika, which will end up worse than Gorbachev’s?

We don’t know how this perestroika will end. It’s already clear that Putin himself doesn’t know – he’s glad for the moment, he has this feeling that he’s writing a Constitution that will help him govern. But that means that he would need to stand behind it, as it’s tailor-made for him.

This is a different state entirely – we have to understand that we’re entering deep, dark waters. It's too late to berate the opposition for not being ready or missing their chance – they've talked many times about the need for a national agenda, and they've instead chosen to focus on street protests. They’ve been outplayed. As of today, the opposition has nothing to offer society.