The site uses cookies and other technologies to help you navigate, as well as provide the best user experience, analyze the use of our products and services, and improve the quality of advertising and marketing activities.
Accept
RTVI
News
19:08
Russian journalist arrested for picketing in support of Police Ombudsman
Share:

Russian journalist arrested for picketing in support of Police Ombudsman 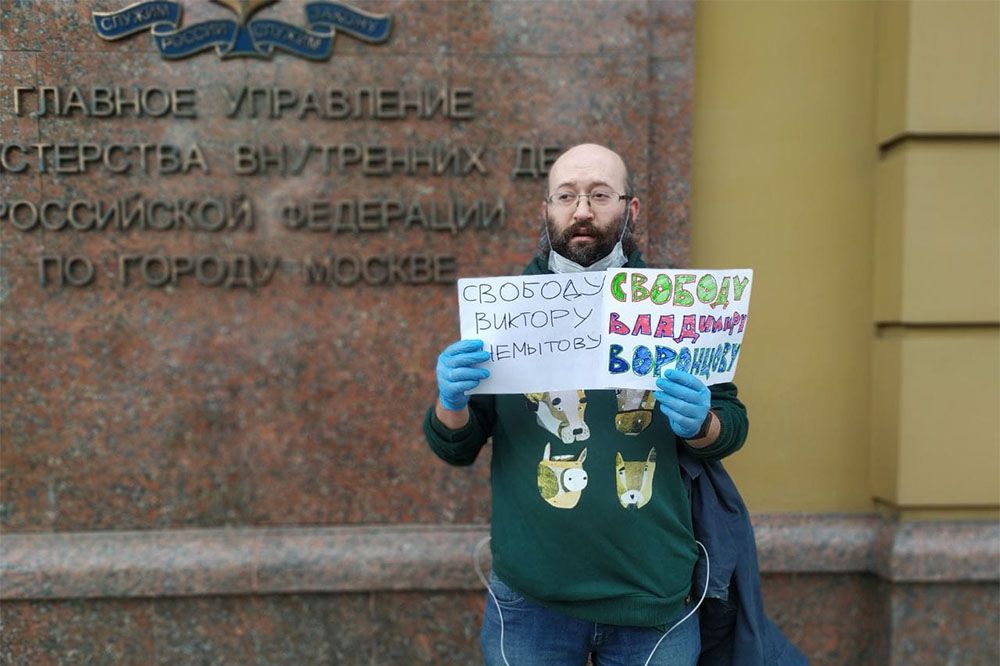 Journalist and municipal deputy Ilya Azar was arrested outside the Interor Ministry building in Moscow while picketing in support of Vladimir Vorontsov, the jailed founder of 'Police Ombudsman', a media project dedicated to highlighting issues in Russia's law enforcement agencies, MBKh Media reported on Tuesday.

Update: Ilya Azar has been released from custody. He has been accused of "repeatedly violating" a law regulating protests, and faces up to 30 days in jail if he is found guilty. A court will hand down Azar's verdict on May 28. Viktor Nemytov has been accused of breaking the same law, and will remain in police custody overnight.

Update: Tatiana Usmanova has been released from custody. Authorities have accused her of violating Moscow's lockdown and breaking a law regulating protests. Verdicts will be handed down by separate courts in two hearings on June 15 and June 17.

The journalist was protesting in support of Vladimir Vorontsov, the creator of 'Police Ombudsman', a media project dedicated to exposing violations in Russia's law enforcement agencies, outside the Interior Ministry building in Moscow.

Azar went out to protest after the police detained activist Viktor Nemytov, who had picketed in support of Vorontsov earlier in the day. The journalist held up two homemade signs reading "Free Vladimir Vorontsov" and "Free Viktor Nemytov."

Tatiana Usmanova, coordinator of 'Open Russia,' a human rights organization with ties to Mikhail Khodorkovsky, was detained for picketing outside the Interior Ministry shortly after Azar. Usmanova's poster read "Freedom to police ombudsmen."

Telegram channel 'Avtozak Live' previously reported that Azar was arrested for violating Moscow's temporary ban on public events, which was instituted to curb the spread of the coronavirus. 'Avtozak Live' editor Maksim Kondratyev became the third activist to be arrested for holding an individual picket, as he had protested following Azar and Usmanova.

Vladimir Vorontsov was arrested by a Moscow court on May 8 on charges of extortion. He will remain in a pre-trial detention center until July 6. Vorontsov has denied any wrongdoing, and believes that the case is "revenge for his public activities in defending the labor rights of ordinary police officers."

Police had previously investigated Vorontsov in connection with an allegedly false post about COVID-19 in a Russian military educational facility.

Vorontsov's arrest triggered an outcry among ordinary policemen across the country, who launched a social media campaign supporting the activist earlier in May.

'Police Ombudsman' is a media project devoted to highlighting problems in Russian law enforcement agencies and protecting the rights of police officers. The project is active on several platforms – Telegram, VK, Instagram and Twitter.

Ilya Azar, a well-known Russian journalist, is the special correspondent for newspaper Novaya Gazeta. He is also a municipal deputy for Moscow's Khamovniki District.

On this topic:
Police Ombudsman social media administrator arrested by Moscow court21:4325 May 2020