The site uses cookies and other technologies to help you navigate, as well as provide the best user experience, analyze the use of our products and services, and improve the quality of advertising and marketing activities.
Accept
RTVI
News
18:42
St. Petersburg authorities investigate toy protest against constitutional reform
Share: 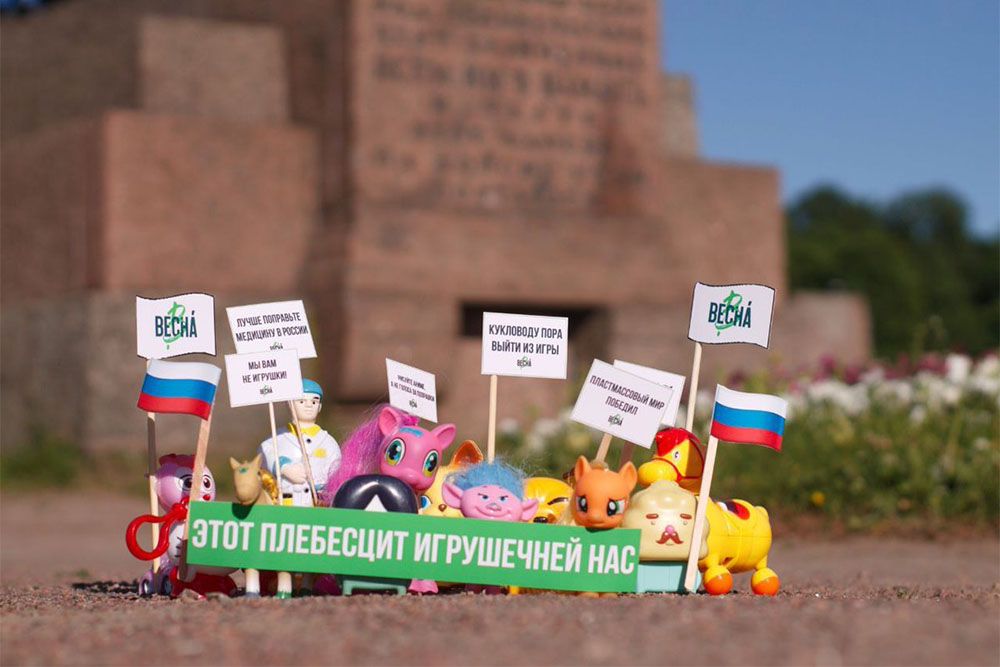 Criminal investigators in St. Petersburg recently came to the house of Sonya Ulyasheva, the press secretary of the opposition 'Vesna' movement, to discuss her "civic position", OVD-Info reported on Monday.

The visit was linked to a protest by Vesna activists on June 21, in which they used children's toys to protest the upcoming vote on amendments to the Constitution, Ulyasheva told police monitoring website OVD-Info.

The so-called "toy nano-rally" was staged on the Field of Mars in St. Petersburg, in which the activists placed toys holding up picket signs opposing the amendments on the grass, and then took photos, which they posted on the movement's social media pages.

The picket signs held by the toys contained slogans like "The amendments won't protect you", "It's time for the puppet master to leave", "We're not toys to you!" and "Improve Russia's healthcare instead".

One image depicted two toy female dolls sitting side by side with a toy daughter, holding up the slogan "This is the Russia I'd choose" in opposition to an amendment outlining marriage as an explicitly heterosexual union.

The activists encouraged Russians to join in the online protest by posting their own toy rallies accompanied with the hashtag #маленькийпротест (#littleprotest).

Russia's plebiscite on amendments to the Constitution will run from June 25 to July 1.

If the majority of Russians vote in favor of the amendments, Vladimir Putin's presidential terms will be reset, allowing him to get re-elected and stay in power until 2036.