The site uses cookies and other technologies to help you navigate, as well as provide the best user experience, analyze the use of our products and services, and improve the quality of advertising and marketing activities.
Accept
RTVI
News
14:39
Thousands rally in support of opposition presidential candidate Svetlana Tikhanovskaya in Minsk
Share: 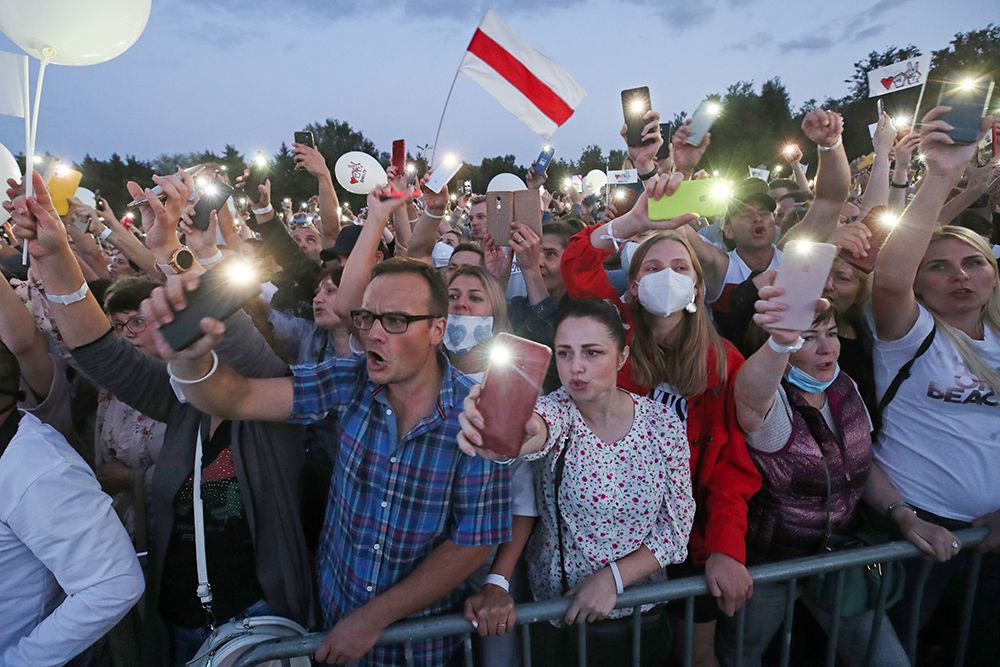 A rally-concert in support of Svetlana Tikhanovskaya, the only remaining opposition candidate in the Belarusian presidential race, attracted 63,000 people to the Friendship of Peoples park on the outskirts of Minsk on July 30, according to a report by local outlet Tut.by.

According to estimates from the Vesna ("Spring") human rights center, the Thursday rally-concert drew a crowd of over 63,000 people, in what many believed to be one of the country's biggest political gatherings since the country's independence in 1991.

Belarusians flocked to the Friendship of Peoples Park despite its out-of-the-way location – local authorities had deliberately chosen the venue to try and keep the crowd size down.

Participants were forced to pass through security checks and metal detectors due to the “heightened security situation” following the arrest of 33 Russian nationals earlier this week that the security services believed to be mercenaries plotting to destabilize the country.

Tut.by correspondents said the crowds were so large they spilled out of the fenced-off area designated for the concert. Local outlet Belsat TV labelled the gathering a "sea of people."

In a speech addressed to the thousands present, Svetlana Tikhanovskaya said she was running for president for her husband and all Belarusians. "My husband opened people's eyes and gave [them] hope for change. He's been in jail for two months already. I don't need power, but my husband is behind bars. I had to hide my children. I'm tired of patience, I'm tired of silence, I'm tired of being afraid," she said.

Tihanovskaya also confirmed that he will schedule a new vote admitting all the barred opposition candidates in the event of her election victory in August. "I found myself in politics not for the sake of power, but for the sake of justice. We've united our efforts for the sake of a common goal – to build a new Belarus," she added.

Drone footage captured thousands of Belarusians holding up their lit phones following the end of the Thursday rally.

Belarus' presidential election is set for August 9. Incumbent leader Alexander Lukashenko has been in power since 1994, and is seeking to secure his sixth consecutive term as president.

Belarusian authorities have cracked down on several opposition politicians in the run-up to the election. Sergey Tikhanovsky, a prominent Lukashenko rival, has been denied the opportunity to take part in the vote, and has been detained and charged with violating public order. He could face up to three years in prison if he is found guilty.

Valery Tsepkalo, a former diplomat and businessman, was barred from the election ballot after authorities refused to admit signatures in support of his candidacy, and fled the country fearing for his arrest.

Her campaign now presents a united opposition front to Alexander Lukashenko's candidacy in what analysts call the toughest re-election campaign in his 26 years in power.