The site uses cookies and other technologies to help you navigate, as well as provide the best user experience, analyze the use of our products and services, and improve the quality of advertising and marketing activities.
Accept
RTVI
News
15:51
US Embassy in Moscow raises rainbow flag
Share: 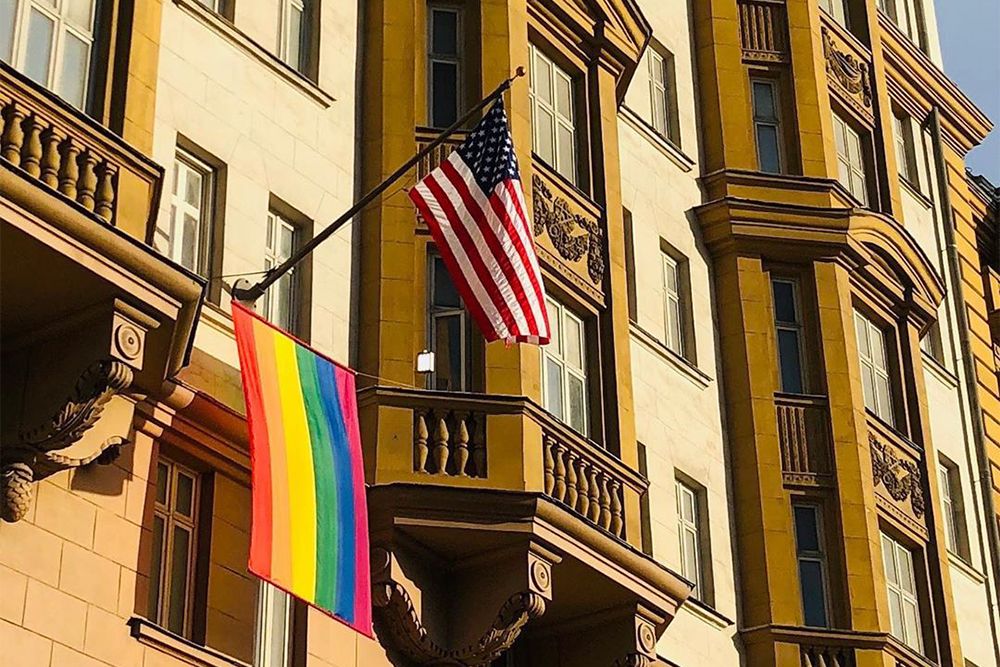 The US Embassy in Moscow has hung the rainbow flag on its facade in honor of Pride Flag Day.

The flag was raised as Russians went to vote on a set of constitutional amendments that outline marriage as a union between a man and a woman. The change to Russia's Constitution, if adopted, will effectively prevent gay marriage from being legalized. Video advertisements using homophobic humor to promote voter turnout were widely circulated in the run-up to the plebiscite.

"LGBTI rights are human rights. Human rights are universal. Pride Month intends to emphasize that everyone deserves to live a life free from hatred, prejudice and persecution," the Embassy wrote on its official Instagram account.

Kremlin spokesman Dmitry Peskov commented by saying: "We in the Kremlin can't see the US Embassy building, but it can certainly be seen from the Foreign Ministry. I think our Foreign Ministry noticed it. In any case, any manifestations of propaganda of non-traditional sexual minorities and so on in our country are legally unacceptable.

Multiple Russian news outlets came out with sensationalist headlines about the flag. "Is this a coming-out party?" US Embassy displays 'wrong' flag," read a headline on right-wing channel Tsagrad TV. NTV, which is owned by the media arm of the state gas giant Gazprom, came out with a piece titled "Russians outraged by LGBT rainbow flag on embassy building."

The embassy was fully within its rights in displaying the flag, as the building does not fall under Russian jurisdiction.

The rainbow flag is rarely seen in Russia due to the country's law on "homosexual propaganda toward minors." LGBTQ activists regularly face political pressure from the authorities and are persecuted for their activism.

In early June last year, US President Donald Trump banned the country's embassies from flying the rainbow pride flag on their flagpoles during LBGTQ pride month. “When it comes to the American flagpole, and American embassies, and capitals around the world, one American flag flies,” VP Mike Pence said in an interview with NBC.

US diplomats have been coming up with creative ways to show support for the LGBTQ community since the ban – embassies in Israel and South Korea both displayed Pride flags this year. The US Embassy in Moscow is no exception, as its rainbow flag was placed right beneath the main flagpole on the building's facade.