The site uses cookies and other technologies to help you navigate, as well as provide the best user experience, analyze the use of our products and services, and improve the quality of advertising and marketing activities.
Accept
RTVI
Stories
22:42
'Nothing to be ashamed of': here's how Russian state media reacted to Western 'misreporting' of Russia's low COVID-19 death toll
Share:

'Nothing to be ashamed of': here's how Russian state media reacted to Western 'misreporting' of Russia's low COVID-19 death toll 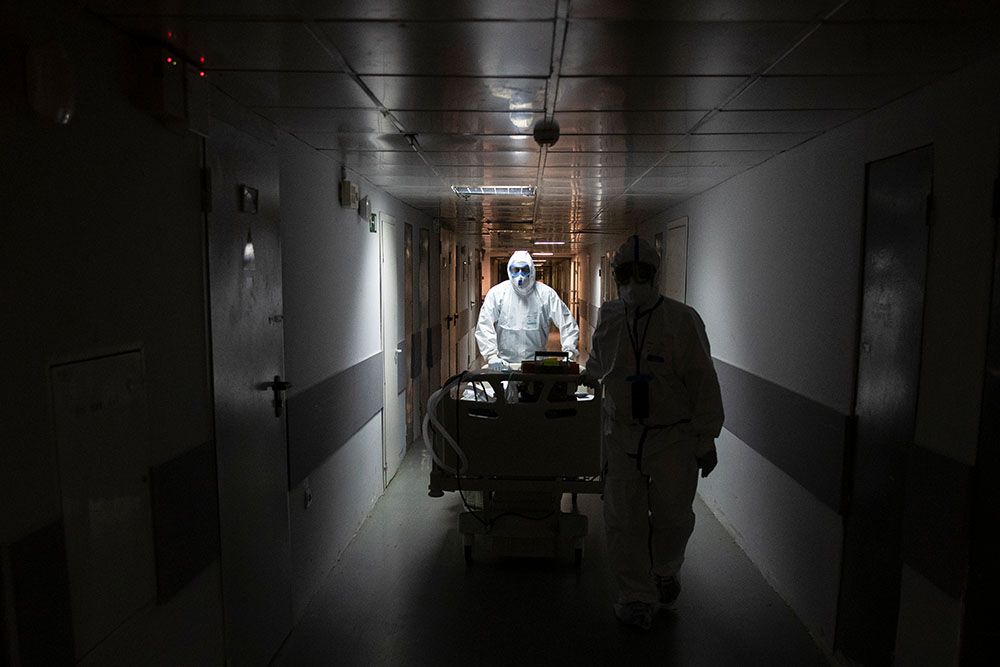 Three major Western news outlets – Bloomberg, the New York Times and the Financial Times – recently reported that Russian authorities were concealing the country's real COVID-19 death rate. The publications triggered multiple responses from Russian state agencies, such as the Moscow government and the Foreign Ministry, which demanded retractions and refutations from all three outlets. Russia's state-run media followed suit, and accused the West of "pivoting to its favorite bête noire – malevolent Russian propaganda."

Russia has faced criticism for its low coronavirus mortality rate – recent reports by the New York Times (NYT), the Financial Times (FT) and Bloomberg have all pointed to the apparent mismatch in the country's high overall infections count [Russia is second worldwide in terms of total COVID-19 cases – Ed.] and its death toll. The FT claimed that Russia's actual COVID-19 death toll could be as much as 70% higher than the officially reported figure, as the newspaper "found 2,073 more deaths in [Moscow and St. Petersburg] in April relative to the historical average of the previous five years."

Moscow authorities responded by saying that more than 60% of deaths among coronavirus-positive patients were not included in the official statistics, as they occurred "from obvious alternative causes."

The reports caused nothing short of a fury among state agencies and officials, with the State Duma's Foreign Interference committee going as far as requesting the Foreign Ministry to 'take action' against the news outlets and revoke their accreditation.

Russian internet censor Roskomnadzor requested that local media reports quoting the articles be taken down. The agency also told RBC that it is 'studying' the FT and NYT's reports for compliance with Russia's law on 'fake news' – the newspapers' websites may be blocked if Roskomnadzor discovers any violations.

Here are some of the stories Russian state media outlets chose to cover in response to the NYT, the FT and Bloomberg's reporting.

State television pundit Dmitry Kiselev had a choice of words for the three outlets, alleging that the articles were rooted in feelings of jealousy of Russia's apparent success in tackling the virus and a desire to see a higher death rate in Russia than the one reported.

"The main thing that this assault has confirmed is that both the US, where the coronavirus mortality rate has gone off the charts, and England, where the picture is only slightly better, are both deeply unable to admit that Russia is going through the epidemic with its head proudly held high. [This is] because it cares about everyone, and because the overall result - a mortality rate of 1% - are now clearly unattainable for those who are so used to bragging," Kiselev lamented in his televised show on May 17.

"This is the moment of truth. When Bloomberg [titles an article] 'Experts Want to Know Why Coronavirus Hasn’t Killed More Russians', they expose themselves as funny. It sounds like [their] dream that the coronavirus would kill more Russians," he continued.

Kiselev believes that the US and the UK should "take care of their own" figures, as there is "all the more reason to". The Vesti host pointed to an apparently low coronavirus death rate in the US and cited National Institute of Allergy and Infectious Diseases Director Dr. Anthony Fauci's recent testimony in the US Senate, where the physician asserted that the country's fatalities were "almost certainly" higher than those currently observed. "The American statistics are fake. It can't be any other way, as the United States' mortality figures have been withheld, and corpses are being buried in mass graves and stored not in morgues, but in mobile refrigerators," Kiselev asserted.

"[Russia] has nothing to be ashamed of," he concluded.

Earlier Vesti publications appear dismissive of the issues raised in the Financial Times' report – "British newspaper gets carried away by looking at specks of dust in the Russian eye," read a video title posted on May 12.

Later coverage highlighted the Russian Embassy in the UK's response to the newspaper – the diplomatic mission labelled the FT's study as 'unethical and unfair' on May 15, and requested that the piece be taken down. "Financial Times gives way: newspaper publishes Russian Ambassador's harsh criticism," read another video report on the following day, hinting at the FT's apparent admittance of wrongdoing.

RT's coverage of the issue oscillated between emotional accusations and demonstrations of alleged restraint from the Russian authorities.

"Journalists should be held responsible for the articles they publish, but public 'show trials' are not necessary", the RT wrote on May 15 citing Foreign Minister Sergey Lavrov.

A day prior, the outlet published a piece titled "Western media concerned coronavirus 'hasn't killed more Russians'." The article points to a "lack of evidence" in the studies, and alleges that US and 'allied' media outlets "seem frustrated that the pandemic isn’t killing more Russians".

"The same outlets that were licking their lips waiting for the Russian body count to explode now seem to feel cheated," RT wrote.

Another report sensationalized Bloomberg's change of its article headline [from "Experts Want to Know Why Coronavirus Hasn’t Killed More Russians" to "Experts Question Russian Data on COVID-19 Death Toll"] – an RT piece on the issue was titled "Bloomberg changes headline YET AGAIN".

"There is not a hint of evidence that the Russian government has covered up the coronavirus toll. Yet, foreign media are skeptical of Russia’s numbers. Perhaps because in their worldview, Russia is not allowed to be anything but a grim and miserable failure at everything. Any fact contradicting this narrative is Kremlin propaganda," read a May 14 op-ed by Anna Belkina, RT's editor-in-chief, echoing the sentiments of alleged jealousy voiced by Kiselev. As with Kiselev, Belkina points to apparent statistical misgivings in the United States, questioning whether the fatalities in New York State may possibly be higher than those officially reported.

Instead of focusing on domestic issues, Belkina wrote, the NYT chose to "pivot to its favorite bête noire – malevolent Russian propaganda", rounding off the article with an obscenity highlighting Russia's apparent dominance in mitigating COVID-19 fatalities when compared to 'First World' nations.

Sputnik News, a subsidiary of the government-owned news agency Rossiya Segodnya, has been relatively more measured than Vesti and the RT, preferring to focus on the state's official responses to the reports.

Sputnik's coverage includes a piece on Foreign Ministry spokeswoman Maria Zakharova's refusal to revoke the NYT and FT's accreditation – "Revoking accreditation, expulsion of journalists or any other repressive measures are not our methods," Zakharova said – as well as several articles on retraction requests from the Russian Embassy in the US and the Foreign Ministry.

Grossman notes that the NYT's coverage is in line with "the daily does of anti-Russian propaganda that this most widely read American newspaper has been carrying on for years now."

Channel One's coverage has also been relatively subdued when compared to the RT and Vesti, as the outlet has apparently chosen not to devote much airtime to the issue.

The channel picked up Maria Zakharova's commentary on Bloomberg's controversial headline on May 15 and refrained from covering the reports for two days. May 17 saw the release of an eight-minute clip titled "Shocking publications in the Western press: who regrets that the virus killed too few Russians?"

As with the RT and Vesti, Channel One's story claims that the US should focus on its own issues – "Instead of looking for anonymous [Russian] officials, [the US press] should listen to their own."

Channel One's most recent article highlights the fact that the NYT edited out a paragraph containing statistics comparing the death tolls in Moscow, New York and London when publishing the government's account of low COVID-19 deaths in the Russian capital.

"Our embassy in the US caught the largest American newspaper The New York Times with fraud and silencing facts that are clearly not in favor of the United States," read the May 19 report.

The piece claims that Moscow's COVID-19 fatality numbers are far below those recorded in New York and in London. "If the difference in additional recorded deaths between April 2019 and April 2020 can be attributed to COVID-19, then the coronavirus death rate in the Russian capital is about 3%, compared to 10% in London and 23% in New York," read the news item.